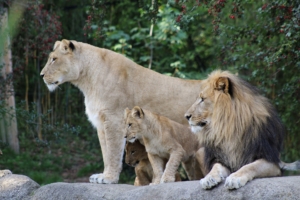 The Lionesses and Anne-Marie Imafidon don’t initially seem obviously related: the former won the UEFA Women’s Euro 2022 competition, with some of the footballers receiving awards in the 2023 New Year Honours list; the latter is a former child prodigy in mathematics who has co-hosted Countdown and in late 2022 was honoured with a morning as guest-editor of BBC Radio 4’s Today programme.  What unites Imafidon and the Lionesses is their understanding of the power of role models: both work to encourage girls to take up football and STEM subjects (Science, Technology, Engineering and Mathematics), using their own achievements to make visible the possibility of professional success within these traditionally male domains.  The idea is simple but effective: if you can see it, then you too can be it.

Two role models are mentioned in Parashat Vay’chi, yet they aren’t Jacob and Joseph, or even any of Joseph’s brothers: rather they are Joseph’s sons Ephraim and Manasseh.  Their births were first recorded in Genesis 41:50-52, in the good years before the famine struck.  Two decades later, Jacob blesses them on his deathbed with a blessing aimed more at posterity than at the two young men in front of him: “So [Jacob] blessed [his grandsons] that day, saying, ‘By you shall Israel invoke blessings, saying: God make you like Ephraim and Manasseh’ ” (Genesis 48:20).

This verse is one of the more popularly familiar Biblical verses, thanks to its use in the blessing that parents offer to their children on Friday nights and other special occasions, usually followed by the Priestly Blessing (itself a quotation of Numbers 6:23–27).   Using a Biblical verse often makes us think this custom must go back into the mists of time, which is reasonably true: the first known record of the custom of blessing children on the Sabbath eve comes from very early seventeenth-century Germany; centuries earlier, Rashi comments that, “When one wishes to bless his sons he will bless them by reciting the formula with which they were blessed — a man will say to his son, ‘God make you like Ephraim and Manasseh.’ ”

There have therefore been many centuries in which to ask: why bless sons that they should be like Ephraim and Manasseh, rather than the Patriarchs or any other Biblical figures?  Two key answers emerge from Rabbinic tradition.  The first is that Ephraim and Manasseh are the first brothers in Torah to get along: unlike all other brothers from Cain and Abel to Joseph’s eleven brothers, they are friends as well as brothers and never even try to kill one another.  The second is that Ephraim and Manasseh were born and grew up in Egypt, yet by the time of Jacob’s blessing they still maintained their identity as Joseph’s sons and preserved the faith of his Israelite fathers.  To bless your sons that they should be like Ephraim and Manasseh thus means to wish that they may be good brothers to one another and to emphasise the possibility of remaining faithfully Jewish while living within another culture.

If this wonderful blessing is offered to sons, what is it that we offer to our daughters?  Girls are traditionally blessed that they should “be like Sarah, Rebekah, Rachel and Leah.” This is not a Biblical blessing; nowhere in Torah are we told to bless our daughters, let alone by wishing that they might be like the four Imahot (Matriarchs).  So why these women, out of all the women in Torah or even Tanakh?  There is no direct equivalence with the boys’ blessing: among the Imahot, only Rachel and Leah have direct contact with one another and their sibling relationship is often competitive rather than harmonious.  We could perhaps find ways in which they are good role models – Rebekah’s determination to make things happen, or Leah’s gratitude for her blessings – or see their status within Jewish tradition as a way of encouraging girls to aim high.

Yet we might also ask: why limit our daughters to these four women?  The Avot (Patriarchs) are important in our tradition and feature prominently in our liturgy, yet to bless sons, Torah calls us to look beyond them and take inspiration from other males who have something important to teach as role models.  Why then do we not do the same for our daughters?  If the only role models available are Sarah, Rebekah, Rachel and Leah, we risk showing our daughters that women have value only as mothers of the next generation, not as people in their own right.

Perhaps this lack in Torah of a blessing for our daughters might be an invitation to seek out women from our tradition who might show girls possibilities as welcome as the examples of Ephraim and Manasseh.  Named women are vastly outnumbered by men in Tanakh, but they do exist, as do Rabbinic developments of their character.  We might choose female role models like Yocheved and Miriam, a mother-and-daughter midwife team who preserved Jewish lives during a time of persecution; or Vashti and Esther, Ruth and Naomi, Dinah and Asenath, Yael and Deborah, Tamar and Rachav… Many Biblical women have qualities that make them worthy people by whom to invoke blessing.

Great though the Imahot may be, they are not the only possible Jewish female role models.  The more possibilities we open, the more chance there is for each of us to find someone Biblical to inspire our Jewish lives.  Inspiring role models whose example shows us who we could be (in Torah, STEM, football and beyond) help us expand the possibilities within Marcia Falk’s blessing for children, “Be who you are – and may you be blessed in all that you are,” by showing us more that we could be.  May each of us find role models to help us see the possibilities and receive the encouragement to become our fullest selves, unlimited by anything but our talents and imagination.