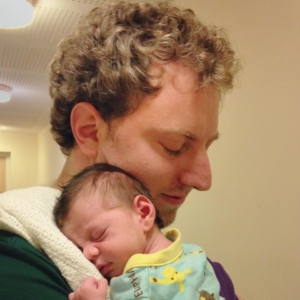 Parashat Vayeira: What about Abraham’s daughter?

“And when his son Isaac was eight days old, Abraham circumcised him, as God had commanded him”. – Genesis 21:4

This week’s Torah portion Vayeira is one of the richest narrative portions of the Torah. In a mere five chapters we learn about: Abraham’s encounter with three divine envoys; the news (and Sarah’s subsequent reaction) that she is to give birth to a child; Abraham’s (failed?) attempt to save the city of Sodom and Gomorrah from destruction; Lot, his wife and his daughters; Abraham and Sarah’s encounter with King Abimelech; Sarah’s banishment of Hagar and Ishmael and, finally, the Akedah.

However, I would like to explore a single verse found within this dizzying array of events: that which describes the circumcision of eight day old Isaac by his father Abraham. The divine instruction to circumcise was introduced in last week’s Torah portion where we are told, “every male among you shall be circumcised at the age of eight days” (Genesis 17:12). In Parashat Lech-Lecha we also learnt that Abraham’s son Ishmael was thirteen years old when he was circumcised. Therefore this week’s Torah portion holds the title of being the first to feature a male child who is circumcised at eight days old. (Of course this also means that Abraham and Sarah are the first parents to sanction and enact the commandment to circumcise a son at the age of eight days).

In Torah, circumcision is designated as a sign of the covenant between God and Abraham, as well as all of his descendants. Notably absent – and it is unclear why – is the requirement for females to be circumcised or physically marked. Likewise in the wider Jewish tradition, girls and women are not required to be marked with a physical sign of the covenant.

In early 2013, my wife Robin and I found out we were expecting our first child. We were thrilled and, though it would not take place until many months later, my mind quickly became preoccupied with ‘how’ we would welcome and mark the arrival of our newborn child. At twenty weeks we found out that we were expecting a girl and so Ibegan to explore historical and contemporary practices for initiating newborn girls into the covenant. Though I found liturgies and ceremonies that could be used to mark the birth of a newborn girl, none of these had the impact of permanence of Brit Milah – the ‘covenant of circumcision’. I began to wonder how do we, as progressive Jews reconcile this tradition with the desire to create a parity between men and women in all areas of life including Jewish ritual?

In 1843, Joseph Johlson, a Jewish school teacher living in Frankfurt, sought to remove all disparity between the celebration of a baby boy and girl. Johlson was part of a group of Frankfurt laymen called the Society for the Friends of Reform. The aims ofthis group were broad and advocated the, “liberalisation of the premodern Jewishcondition”. The society opposed Brit Milah for several reasons including its physical nature as well as its primitive and irrational appearance. It was this mind-set that motivated Johlson to create a gender-neutral circumcision-less brit ceremony, which largely comprised of the established brit ritual without any reference to circumcision or blood. Johlson’s intention was to replace circumcision with this new ceremony to be performed on both boys and girls.

Shulamit Magnus, a professor in Jewish history and founder of Women of the Wall, also takes issue with the practice of circumcision. Like Johlson, Magnus proposes the creation of a gender-neutral ceremony to be used to mark the birth of either a boy or girl. However, unlike Johlson, Magnus argues that the longstanding history of male circumcision within Judaism means that it should be retained but demoted of its public status.

If egalitarianism is a primary motivator in the development of initiation ceremonies then we must pause for a moment to consider if at any point in Jewish history baby girls were ritually circumcised. Shaye Cohen – the author of Why Aren’t Jewish Women Circumcised – concludes that the answer is no. Cohen’s book is very much focused on Judaism’s lack of ritual circumcision for girls. However, in the past fifty years some Jews have suggested that, in order to raise the status of their initiation ceremonies, symbolic blood should be drawn from newborn girls. Perhaps the most radical of these proposals came from Mary Gendler who in 1974 suggested a new ritual involving, “a ritual rupturing of the hymen soon after birth”. Gendler explains that her understanding of circumcision as a “marking and opening of the generative organ and a consecration to God of the seed which will issue from it.” Gendler believes that a lack of an equivalent ritual denies women a direct connection to the Covenant and therefore God.

Though Gendler’s proposal remains theoretical rather than practical, she highlights the emotional and symbolic power of blood. As long as circumcision continues to be part of the ritual for welcoming newborn baby boys, any equivalent ceremony for girls (that do not draw blood) will fail to be as powerful. One argument that has been suggested is that a woman’s menstrual cycle obviates the need for drawing blood at eight days old. However, I feel menstrual and ritually drawn blood cannot be equated as being synonymous with covenant. In an egalitarian framework we are left with two options: to cease practising male circumcision or to establish an equivalent practice for females.

To be clear, I am not advocating that Judaism introduce ritual female circumcision; far from it, I am completely against any such notion. What I wish to emphasise is that the physical act of Brit Milah is indeed a powerful one. As author and attorney Sharon S. Siegel points out, “covenantal entry is a key life-cycle milestone for girls. As such, it demands a central covenantal ritual that signifies the moment at which a girl is initiated into the covenant of God and Israel”.

There is so much happening in Vayeira, it is easy to read the whole thing without pausing to wonder, what about our daughters? Though no solution has yet gained consensus, if we are to stay true to the egalitarian principles that underpin progressive Judaism, then we must continue to strive for a practical solution to this ritual inequality.