What does it take to destroy a city? 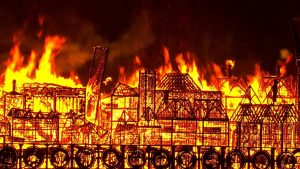 Sometimes a city must be destroyed.

Sodom was one of those cities. Sulfurous fire rained down from Heaven. The cities and the entire plain were laid waste. [Gen 19:24-25] Afterwards, all that was left of this once great city was hot smoke rising from its ashes. [Gen 19:27-28]

Abraham came the next day and saw the wreckage: hissing steam trailing upwards with little evidence that there had ever been a city there, let alone one teeming with human beings.

Had there been human beings there? Abraham had been told that the city must be destroyed. And he had negotiated with God. God, usually so terse with words, had permitted him lengthy bargaining.

Ten. Ten righteous people is all it would have taken to defend this place from destruction.

Abraham’s stomach churned as he imagined what later generations might say. Some would say it was a myth; that Sodom had never existed. Worse, some would argue that it was destroyed because they were gay. Small-minded people who wanted to shrink God tiny enough to fit inside people’s bedrooms. Bigoted people who wanted to justify their own bigotry.

They would have to understand that God did not take the death of humanity so lightly. This was not a place where consenting adults slept with each other. It was a rape culture, where sexual violence was normalised and celebrated.

In that city, the people saw two angels of the Holy One stay the night in one home and immediately went to hurt them. Within moments of their arrival at Abraham’s cousin, Lot’s, home, the whole city was out at the door clamouring to assault them. And Lot – his own family – had offered up his daughters instead, as if he had become so assimilated into this evil place that he thought raping girls would somehow be an improvement. Then they had threatened to do even worse to Lot. [Gen 19:3-9]

But in the course of accumulating more than they could ever need, the people of Sodom had lost track of Who provided for their needs. They forgot God. They became so selfish that they even cut the branches off fruit trees so that the birds would not share in their bounty. They legislated against charity. They threatened anyone who attempted to strengthen the hand of the poor with burning by fire. [Pirkei deRabbi Eliezer 25]

They played with their victims. If a beggar came there, every resident gave him a coin, upon which he wrote his name, but no bread was given him. When he died, each resident came and took back his coin. They turned starving the homeless into a game. [Sanhedrin 109b]

They made good on their threats. Once, a young woman secreted bread in a pitcher to feed it to a poor man. When she got caught giving him the bread, the townspeople dragged her to the edge of the city. They smothered her in honey. Bees came. And ate her alive. [Sanhedrin 109b]

Some would imagine these were just embellished stories from feverish rabbinic imaginations. They could not know the depths that humanity could sink to. They did not know what it took for a city to reach the point where it must be destroyed. Abraham knew.

In a city where everyone is compelled to do evil, there is no hope for improvement. All that is left to do is burn it to the ground and begin again. That’s what it takes to destroy a city.

For those who wish to wilfully misunderstand the sin of Sodom, it is a thing that is done by different people in far-off places. For those who understand that the Torah speaks to every time and place, Sodom is a city close at hand.

Is the city that has made compassion illegal not already where we live? Is it not in the food banks where struggling people turn up and hear they’ve already had their rations? Is it not in the disability assessment offices where workers are rewarded for denying sick people benefits? Can we not already see Sodom here in Britain?

In Sodom, a great and wealthy city of thousands of people, all of whom knew what was happening, nobody objected. [Sforno on Gen 19] Not one person was willing to stand up to the city and say that what it was doing was wrong. Abraham had haggled God down to ten. But he could not find one.

Ever since that time, Jews have gathered together in groups of ten. We call this group a minyan. From the root: מנה – count. A group that is able to be counted.

In fact, Sodom is closer even than that. It is inside our own hearts. It is the part within us that wishes to be greedy rather than giving, violent rather than compassionate, cruel rather than kind. That version of Sodom exists within every person and in every system. And it must be destroyed.

As Jews, that is our calling. To be human where there is no humanity. [Pirkei Avot 2:5] To be the ones who object. To be the reason that a city is saved.