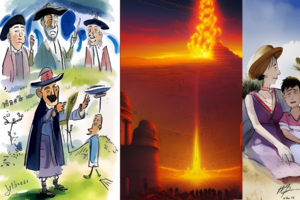 What sort of God has our parashah brought us?

What deity is this who sends the same messengers to foretell the birth of a child and nation as are sent to herald the destruction of two great cities.

What divine presence have we here, who makes a heavenly decree of destruction only to engage in bargaining with a mortal to upend that divine decree?

What eternal entity have we here, who promises a son and multitude of progeny to the same man from whom the demand is later given to offer that son as a sacrifice?

What sort of God has our parashah brought us?

How can we come to terms with the seemingly irreconcilable words and actions of Adonai?

In Parashat Vayeira, God rages from the heavens and seeks to unleash divine justice on the world immediately surrounding our patriarch, Abraham. The body count is high, and the landscape forever changed by the time Sodom and Gomorrah are ashes.

What does a span of ten generations look like?

Ten generations ago, Moses Mendelssohn sought to bring Judaism into the modern age through the Haskalah, the Jewish Enlightenment, eventually leading to the German Reform  movement of Judaism. Ten generations before that, Jews were officially expelled from Spain by the Alhambra Decree, following a long period of persecution, forced conversion, and murder known as the Inquisition. And ten generations before that was the era of the Rishonim, those many great Jewish scholars who poured their insight into our religious and legal texts and helped to formulate a more standardised Jewish practice in each region. And just ten generations before that, Saadia Gaon gave the world the gift of his siddur, a prayer book which set standardised liturgy for daily life, shabbat, and festivals. And with these examples, I have merely accounted for a few grains of sand in the enormous hourglass of those forty generations.

Forty generations is 1,000 years. Granted, the Torah tells us that our ancestors before the flood lived a lifespan of over thirty generations each, and Abraham and Sarah would not have their son Isaac until they were over 90 years old.

But I digress. The natural state of God’s world seems to be one which descends into chaos. In the case of Noah, it only took one righteous person for God to be willing to try again. In the case of Sodom and Gomorrah, it was only one righteous man who attempted to stand between God and the destruction of those cities… if only Abraham could have produced ten innocent men in the whole of their population. Better than the fifty with which Abraham had begun his bargaining.

It is easy to see the rage of God as the major theme here. I hate to break it to you, but we humans are an imperfect creation. Yes, we are made in the image of God, but an image is never as good as the real thing. Three weeks ago I was in Jerusalem and I took several photos in the old city. When I look at them I can imagine the bustle and the noise and the smells, the heat in the air and the sense of being somewhere so very holy to so very many people. But looking at that picture is not a trip to Jerusalem. Touching a photograph does not give me the age-worn smoothed bumpiness of Jerusalem stone. An image is only that – the best approximation of reality from a limited perspective.

When our parashah opens and Abraham is sitting by the opening of his tent, he suddenly sees three strangers standing before him. His first instinct is to treat them like travelling royalty, setting his household abuzz to produce food and a comfortable place to rest. He could not possibly have known that these were messengers of God, until he and Sarah were promised a child within one year.

Critical question time: were the messengers of God sent specifically to tell Abraham and Sarah that they would have a child together, or was it their hospitality which was rewarded? Perhaps this was a test, and it only took one selfless act.

This should be happy news for the couple, however the birth of this child, Isaac, will result in possible disaster for the child Abraham had previously had with his wife’s servant, Hagar. She and her son Ishmael will be cast into the desert to fend for themselves, so that Isaac’s inheritance should not be diminished.

Did I not already mention that an image of God, such as we are, is imperfect? We have our moments, but often more prominent are our flaws, and flaws abound in this parashah.

So, is the human, made in the divine image, merely acting out the rage, indecisiveness, scrutiny, and need to create loyalty trials which are inherent in God? Or is all of this God’s reaction to having to deal with imperfect creations such as we are?

It’s easy to become mired in the negative attributes, yet so much more useful to find the flecks of gold shining through. Abraham is a gracious host. He is also willing to challenge God to sue for the lives of ten righteous people among the thousands of evil souls. He follows the will of God, every demand to the letter, even when it could theologically break him, even when commanded to end the life of the son he was promised. Every single one of those events, as well as the many I left unnamed from this parashah – all of them have their problems, their issues, their flaws. But what will they say about Abraham ten generations later, twenty, thirty? Can we understand the context of his life and the lives of those who recorded his story?

May we not merely ask ‘what sort of God has our parashah brought us’, but rather ‘what sort of person has God brought upon this earth, who learns from the telling and retelling of our stories, flaws and all?’