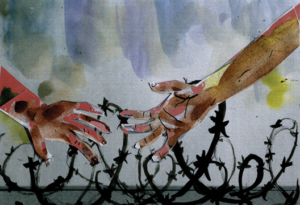 Trauma. No matter what we do, it seems contagious. If we talk about it, we’re passing it on. If we ignore it, we’re leaving an elephant in the room. If we follow everything the psychologists say and talk about it in exactly the right way, apparently it can still show up in our children’s genes. As if the trauma itself wasn’t worrying enough, we now have to be concerned that it might be inescapably hereditary.

My peers and I keep circling back to the question of what we do with Jewish neurosis. If we have children, when do we tell them about the Holocaust, or the pogroms, or our fears? Should we tell them? If we do not have children, what role do we play in shaping the communities in which young people are raised?

These are intensely sensitive questions. I do not want to dictate to anyone how they should feel about them, nor to project my own concerns onto other people’s families. But I recently realised that I have spoken more about the existential issues around the Shoah to non-Jews than I have within the community, and feel that a conversation is overdue.

Often, I feel like these discussions only take place in private conversations. Few of us are willing to publicly acknowledge how intergenerational anxieties shape our communal responses to everything from government policy to synagogue membership statistics.

In particular, while the previous generation of Jewish leaders had people who felt comfortable sharing their own experiences and reflections on our collective traumas, as generations are increasingly separated from the events that caused the anxiety, we have become less willing to discuss them. It seems we have decided to move on without explicitly saying how we intend to do so or where we plan to go.

If we want to look forward to a Jewish future, we must first acknowledge its past. That begins, of course, with the Torah. Genesis can be seen as an exploration of overcoming intergenerational trauma. The story of the human family begins with Adam and Eve, who are cast out of paradise and subjected to the first experiences of suffering and pain.

Their children are Cain and Abel. In the first parashah, one jealous brother murders another. The survivor, Cain, carries a scar that he will pass on to his descendants as a remembrance of that violence.

Generations pass, but that cycle of sibling rivalry continues. Abraham’s two sons, Isaac and Ishmael, keep up that conflict, spurred on by competitive parents. Ishmael is banished into the wilderness with his mother. Isaac is almost sacrificed on an altar. Isaac does not speak to Abraham again. He and Ishmael are only reunited at the point when Abraham dies, when they come together to bury him.

Isaac’s children fare no better. From the first moment, Jacob grabs Esau’s heel on the way out of the womb. Isaac and Rebecca seemingly pit their sons against each other. Jacob tricks Esau out of his birthright. Laban tries to kill Jacob.

Now, at the point when this week’s parashah begins, we expect the violence to be heightened. Jacob is trepidant, fully expectant that Esau will also try to kill him. He sends envoys of gifts, goodwill and messages of peace. Esau comes out with four hundred men, and it looks like the two parties will have to prepare for all-out war. Instead, Jacob bows seven times before his brother. Esau runs up to Jacob, throws his arms around him, kisses him, and cries. At the final moments of this parashah, Jacob and Esau bury Isaac together.

Healing takes time. It can take centuries. The span from Cain and Able to Jacob and Esau is 20 generations. That was how long it took for those brothers to make the first steps towards acknowledging the trauma they had inherited and trying to reconcile.

Healing can happen in an instant. All it took was for Jacob to show humility and Esau to show compassion. Tears, heartache, and honesty can do in a few minutes what years of failed initiatives cannot. It requires a decision not to be defined by the tumult of the past.

This brings us to the present. The behaviours of the patriarchs might be likened to the trauma responses of some of our own community members in facing the tragedies of the past. Some chose Isaac’s path of silence. Some, like Jacob, could not bear to tell the truth. Some even took up Cain’s route and engaged in violence. And yes, some, like Esau, made the decision to leave the past behind them and find new meanings.

I am not casting judgement on how any individual has responded to their suffering. I think, most likely, each of us has adopted all of these postures at some point. But what concerns me is how, communally, the British Jewish community has decided to interpret the Holocaust. It seems that, in our communal press and many of our institutions, there has been a tacit, possibly even unconscious, decision, not to move on from the past.

Instead, we are constantly re-traumatised; reminded that another genocide could await us at any moment if we are not completely vigilant to even the slightest threat, however real or imagined. During the build-up to the General Election two years ago, I had to patiently counsel many terrified older people that there was no existential threat to Jewish life, and they could still sleep safely in their homes. We should never have reached the point where they felt so scared.

What values are we communicating when almost every response is an anxious trigger, rather than a measured engagement with reality? I think there are some who believe that constantly teaching our children about Jewish suffering will convince them into remaining Jewish. Even if they are right, at what cost does their Judaism continue? If they are only affiliated out of guilt or paranoia, what quality of Jewish engagement do they really have?

In 1982, Rabbi David Hartman (zichrono livracha) warned Israeli civil society that they faced a choice between being defined by Auschwitz or by Sinai. At Auschwitz, we learnt the wickedness of which people were capable. At Sinai, we learnt the wonders of what God could do. The Israelis could either define themselves by the trauma of the gas chambers or by the miraculous moral message of revelation.

That essay has been cited many times, but I don’t think the British Jewish community has yet accepted that it might have lessons for us too. We are also faced with the choice of structuring our lives as if they are a moral calling from God or as if they are a cause to be constantly afraid of the rest of humanity. Only once we realise that we have taken the wrong path will we stand a chance of facing up to our trauma, and beginning to heal.