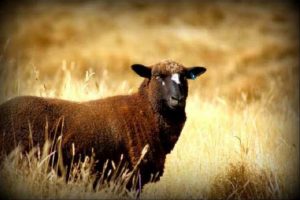 The world used to have some very strange ideas about reproduction. Pliny the Elder wrote about how baby bears are born in the wrong shape and have to be licked into bear-shape by their mothers; it was commonly believed that fleas were ‘born’ from dust; and of course there is the old myth about using a ring to determine the sex of an unborn child.

So it is no surprise that many early commentators considered Jacob’s engineering of his uncle’s flock to breed mainly speckled, spotted and dark sheep to have been  a sheer miracle.

Of course, we know now that simple selective breeding can achieve such a result. But in between the ‘miracle’ period and the ‘evolution’ period, for centuries, the curious passage in Genesis 30 about Jacob placing sticks in the animals’ water troughs was interpreted rather differently.

Before theories of heredity, it was popularly believed that changes to an animal’s body during its lifetime could be passed on to its offspring – the classic example being that a giraffe which had to stretch its neck to reach high-hanging fruit would strengthen its muscles, and would therefore produce offspring with muscles stronger than the norm.

This idea was taken one step further (or, as Charles Darwin might argue, one step backwards) with the theory of ‘maternal impressions’. This was a widespread belief that a mother’s experiences during pregnancy and, especially, around the time of conception would influence the child.

Therefore, when Jacob placed carefully-chosen sticks around the sheep, could he have been trying to influence them? Would dangling a speckly pattern in front of a pregnant or almost-pregnant ewe encourage her to give birth to a speckly lamb?

These days we know full well that a mother’s experiences do not transfer to her child on its birth. But we also know that in many cases, for human beings, a mother’s experiences are vastly on her child after birth – as are the father’s. Typically, the characteristics that parents’ experiences influence are more important to society. Skin, hair and eye colour are not totally irrelevant, but unlike with Jacob’s sheep, with a person society looks, or at least should look, less at whether or not they are speckly and more at their skills, their values, their personality, their sense of humour, how they treat others.

Empathy is not, for the most part, hereditary. Nor is religion an inherited characteristic.

The Liberal movement’s statement on Jewish identity recognises that “Judaism is not transmitted genetically but culturally and within families through example and influence. The process of transmission is one of education, so that what is transmitted is not merely knowledge but beliefs and values, attitudes and ideals, and above all, a sense of identification and commitment.”

In other words, while Pliny the Elder may have known very little about the reproductive cycle of the bear, he unintentionally told us rather a lot about the reproductive cycle of the Jew. When a Jewish parent has a child, that child is not yet properly Jew-shaped. It has to be licked into shape by its parents: not physically, but educationally. A child is licked a bit by experiencing an early ritual (be it circumcision, baby naming or something else). It is licked a bit more by seeing Shabbat candles in its home. It is licked further by hearing the odd Hebrew or word in conversation, even if it is far too young to understand these. Maybe there is the odd blast of klezmer music around the house, or a first taste of matzah come Pesach. These all help shape a Jewish identity in an emergent personality.

The wider Jewish community takes some responsibility for the licking as well – children’s services, chedarim and youth movements all play their role. These things are the speckled sticks of the modern Jewish community. Dangling them in front of a Jewish parent expecting a new child does not have the biological or genetic impact which some commentators seemed to believe; no matter how many services a pregnant mother sits through, her baby will not emerge from the womb able to recite the Torah blessings. But these speckled sticks do, nevertheless, have an impact even before the baby is born. They tell the parent or parents that the community is there for them. They welcome. They help signpost the ways that a Jewish home can be created. Through LJY-Netzer and RSY-Netzer they even offer a glimpse of the odd quiet weekend in the future while the children are being looked after and learning about their Judaism elsewhere.

The story of Jacob’s sheep was misinterpreted for centuries by a bogus pseudoscientific theory which believed that the colour of a sheep’s wool could be influenced by human intervention. Yet even bogus pseudoscientific theories have their uses. The characteristics of our community’s children can indeed by influenced by human intervention. The steps we take to make the best influence we can are down to us.