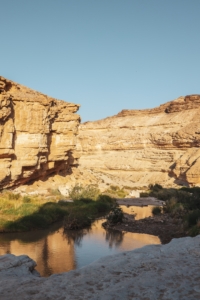 Let Us Be the Ones Who Bring Water

Sarah and Abraham had a reputation for being unconditionally welcoming. Their tent was open on all sides, an invitation to wanderers to seek refuge in their home.

But, sometimes, our heroes do not live up to their reputations. Nowhere is this more true than in the story of Sarah’s treatment of her reproductive slave, Hagar, and Abraham’s complicity in this abuse. By the time we reach Parashat Vayera, Sarah has already abused Hagar so badly that Hagar has run away, returning only at the urging of an angel, who assures that her future son, Ishmael, will be a great nation. Now, Ishmael is a grown boy, and Sarah, after many childless years, has had her own biological child, Isaac. At Isaac’s weaning feast, Sarah sees Ishmael playing. Sarah decides she doesn’t want Ishmael to inherit along with Isaac, and instructs Abraham to cast out Hagar and Ishmael. Initially, Abraham is distressed. But God tells Abraham, “Everything that Sarah tells you – listen to her voice.” So, Abraham takes some bread and water, and sends Hagar and Ishmael out into the wilderness. When the water runs out, Ishmael is close to death, and Hagar hides him under a bush, sitting a bow-shot away, so that she doesn’t have to watch him die.

This story is heartbreaking; it has always upset me. Sarah’s cruelty. Abraham’s inability to stand up for Ishmael and Hagar. Is this behaviour worthy of the matriarch and patriarch who were known for their unconditional welcome?

A few years ago, I encountered a book entitled Sarah the Priestess by Dr. Savina Teubal. While it didn’t completely allow me to forgive Sarah, it widened my perspective on this tale. Teubal’s argument is that Sarah’s story parallels that of contemporary priestesses in the Ancient Near East, and that the Biblical narrative is the story of Sarah’s own priestesshood, heavily edited by later patriarchal sources. For example, Sarah is childless for many years. Certain classes of Ancient Near Eastern priestesses, such as those who served the childless goddess Innana, had to remain celibate as part of their sacred duties. Teubal suggests that Sarah was childless by choice, not by biology, as a part of her religious role. According to Hammurapi’s code, celibate priestesses could enter into a conjugal arrangement with a second wife and her husband, so that the second wife could produce children for her. It appears that the original terms of Sarah’s relationship with Hagar parallel this law. Furthermore, if that second wife didn’t know her place, Hammurapi’s code rules that the first wife may put the mark of a slave on her – that is, she may lower her status, and abuse her, just as Sarah abuses Hagar.

Moreover, according to the earlier Babylonian law code of Lipit-Ishtar, if a wife bears children for her husband, and her husband also has children by a slave, but the father grants freedom to the slave and her children, then those children do not inherit alongside those of the wife. Teubal suggests that when Sarah ordered Hagar and Ishmael’s expulsion, she was adhering to this law. It is then, unsurprising, that Abraham would not contest it.

If we follow Teubal’s reading, Sarah’s behaviour was legal and normal. She followed the rules of her society, and the laws of her homeland. But does this exonerate her? Perhaps we may empathize with Sarah, and forgive her just a little. She must have thought herself in the right, and likely didn’t give much thought to her behaviour. But legality and morality are not the same thing.

Sarah’s behaviour opens up an important conversation for us today. We still live in a world where something can be law, even if it is not ethical. I could devote my entire word limit to listing these laws. However, I want to focus on an issue that has particularly touched my heart, especially because of its resonance with the story of Hagar and Ishmael. It is not yet law, but it could be.

Over the summer, the government introduced the Nationality and Borders Bill, which has made it through two readings in parliament. Should the bill become law, it will have devastating consequences for refugees and asylum seekers. The proposed legislation means that refugees will be treated differently based on how they arrive in the UK. It removes a person’s automatic right to asylum and offers less protection for child refugees. Refugees arriving through unofficial means could face criminal charges, be deported back home or to a supposed “safe third country,” or be imprisoned for up to five years.

This is how our country proposes to treat our modern-day Hagars and Ishmaels.  Like Sarah and Abraham, instead of being unconditionally welcoming, the government wants to pass a law that will cast our Hagars and Ishmaels into the wilderness. We must acknowledge that just because something is allowed by law doesn’t make it right. We need to kindle our awareness of the distinction between legality and morality, so that we can make ethical decisions that are not enshrined in law. Or indeed, to identify when things that are enshrined in law are unethical.

Sarah and Abraham teach us how easy it is to become thoughtless, callous and unwelcoming, even if we don’t intend to be. Even if it is the law. It is our responsibility to learn from the mistakes of our ancestors. We cannot go back in time to give Hagar or Ishmael a better life. However, we can look at our society, and actively welcome those whom our own lawmakers seek to reject. It can be difficult to know where to start, so here are a few ideas of how to support refugees and asylum seekers arriving in the UK: 1) Write to your MP. Call on them to oppose the Nationality and Borders Bill. 2) Donate to organisations coordinating support for refugees, such as JCORE or the Red Cross. 3) Join a Community Sponsorship Group through Reset UK, which brings communities together to support refugee families.

Hagar and Ishmael’s story has a happy ending. Just as Ishmael is about to die, an angel arrives, promises Hagar a bright future for her son, and shows her a well of water. Hagar and Ishmael revive themselves, and they build a new life in the desert of Paran. This Shabbat Vayera, I invite us to look for ways in which we can be the angels for those who need us most. Let us be the ones who bring water. Let us be the ones who make a bright future possible. Let us do what Sarah and Abraham did not, and, no matter what our laws say or don’t say, offer love, care, support and welcome to those who need it most.