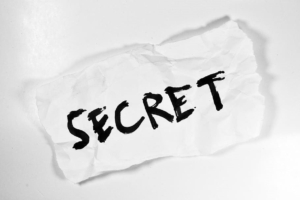 ‘With a burst of inspiration, William said: “Let’s have a Secret Society.” “Gosh, yes!” said Ginger. “That’s a jolly good idea.” “An’ we’ll have passwords an’ disguises,” said William, “an’ put up a notice an’ have a meetin’ in the old barn an’ I’ll make a speech.” “You can’t make a speech about a Secret Society,” said Henry. “If it’s a Secret Society it’s gotter be secret.” “Yes, I s’pose so,” said William regretfully. He prided himself on his powers as a public orator and did not like to let slip any opportunity of using them.’

So began one of the many Just William stories whose plot revolved around a ‘secret society’. The human desire to have secret societies – to revel in the comradeship of some shared secret – is not difficult to explain.

The philosopher Sissela Bok has observed, “Secret societies can be rewarding and inspiring to insiders while harmless to outsiders. They offer the pleasure of secret rites, challenging ordeals and a group identity few other organisations can muster. Adolescents, in particular, often join such secret groups. In trying to sort out what belongs to the world of self and to that of others, and in probing their own identities, they are especially open to the allure of secret societies. They may long, too, for hierarchy and for clear lines of authority, and relish the chance to prove themselves in accepted rites of passage. The secret society serves purposes of growth. Like play, it offers the freedom to trust and to be creative, and the excitement of transcending ordinary limitations.”

In Parashat Vayeshev, we see the dissolution of a secret society. Joseph’s brothers had, between them, and on pain of mutually-agreed punishment, been concealing the fact that Joseph was still alive.

Secrets do, of course, have a genuine value. They can maintain privacy and protect our private lives from unwelcome and unwarranted intrusion. They can help us to build trust with others. Relationships – whether spouse-to-spouse or congregant-to-rabbi – are founded on some assurance that the words that pass within them will remain confidential. And, of course, the safety and wellbeing of our nation depends on certain information being kept secret, lest it fall into the hands of terrorists, organised crime groups or (so we’re told) EU fishery experts.

But there is also a dark side to secrets. Sissela Bok adds: “While not all that is secret is meant to deceive, all deceit does rely on keeping something secret. And while not all secrets are discreditable, all that is discreditable and all wrongdoing seek out secrecy. Even adolescent secret societies can have their ills: the lines between play and reality may become erased, so that members, under the cloak of secrecy, take action against outsiders in a manner for which they would otherwise be held accountable. Or else the playing goes on too long, and overage adolescents repeat and repeat again what they should long since have left behind, making the secret activities a surrogate for forms of human contact and exhilaration they cannot find elsewhere.”

It seems to me that Joseph’s brothers are a perfect illustration of the process being described. What began as a simple bit of childish japery – ‘just’ a group designed to exclude their, admittedly arrogant, younger brother – the boys inevitably took it too far, and their scheme grew so big that it was uncontrollable. Joseph’s behaviour made it very easy for them to treat him as an outsider, but without the gang-like atmosphere – without a group whose members egged each other on – things would never have reached the point that they did.

And what point did they reach? The brutal treatment of Joseph, of course, but also the brutal treatment of Jacob. Fooling an elderly man into believing that his most cherished child had been savaged by a beast is unspeakably cruel. And, frankly, the brutal treatment of themselves. Nobody was the winner in this scenario, because the brothers could, surely, never again look Jacob in the eye, either before or after they came clean. The alienation must have been absolute. Before the secret was revealed, it was the elephant in the room, a huge immovable barrier between father and sons. After it was revealed, it will have become the gulf left by any major betrayal of trust.

Things will never have been the same again. And they could have been different, if only one of the brothers had not joined in the pact of secrecy. But, of course, they all joined in, because that is how wrongdoing happens. The secret society is bigger than its members, and it pushes them into doing things they would never, left to their own devices, have done.

Secrets do, of course, have a genuine value. But these tend to be secrets of the personal kind. We keep secrets to let us develop our own personalities without the glare of other people’s views or judgements. But secrets that concern other people serve to alienate. And although there are no secrets from God, the human consequences of the total breakdown in relationship – surely they alienate from God.

A secret that is exclusionary, guilty or just plain nasty can, certainly, help us to forge a relationship with one person or with a small group, but by its very nature it distances us from the rest of the world. Parashat Vayeshev shows us that this cannot be worth it.