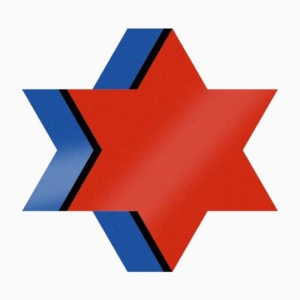 Parashat Vayeshev – Joseph and David Bowie z”l – We Could be Heroes.

It’s Hanukkah soon, so I thought… Why don’t we treat ourselves a little?!

There is something so rock’n’roll about the Torah. If we want to look at it this way, there are lots of parallels we can draw.

From Adam and Eve to Noah… Those generations, we could see them as the pioneers of Rock’n’roll. The first bluesmen and Rock’n’Roller… From Muddy Waters to Sister Rosetta Tharpe, Little Richard and Chuck Berry. They are the founding fathers and mothers, the basis, the matrix.

And if we go a little further down the road, we have Abraham.

Let’s see him as the King… Elvis Presley… I mean… Who else?

Isaac, for many reasons, he is the discrete one. But without him, there would not be so much going on either. I would like to see him as a folk figure. Someone as distinguished as Dylan or Leonard Cohen maybe… And Cohen did write a song about him, right?

Then, we have the one with the rocks. Jacob. He definitely is a Beatles / Rolling Stones kind of character. From a discrete teenager, he became an ultimate leader. So big the whole country will be named after him. Instead of speaking of a Jacob-mania, God “simply” called him Israel!

And then… Then we have the one we are concerned with today, Joseph. And when I imagine him with his colorful poncho, well, I cannot but think about… David Bowie.

So it started like this, as a little something I told myself. What if Joseph was some kind of David Bowie?

And the feeling got a little stronger when I started thinking about the “shy” figure David Bowie was in his beginning. Neither Bowie nor Joseph were really shy, but they definitely were a thousand lightyears from the ones they ended up becoming.

And then, I started thinking about that distance, that journey both went through, and this is where it got interesting.

Therefore, we have quite a few episodes we can compare the two with!

Bowie, when listening to his early record(s), we have the music of a distinguished man with visions. And the minute he recorded Space Oddity, a song inspired by Kubrick’s 2001: A Space Odyssey, in which Ground Control speaks to Major Tom until Major Tom gets lost and they lose connection, everything changed for Bowie. The creativity got stronger, the amplitude got more substantial, the narration got more profound.

This decisive moment in Bowie’s life, it can be compared to the moment Joseph was put down a hole by his brothers. As Bowie was under the influence of the founding fathers of rock’n’roll, Joseph was too much adored by his father. He needed a break. And after his brother’s attempt to kill him, Joseph started changing. As explained in the famous Journey of the Hero by Joseph Campbell, one always needs to reach a liminal point before starting his metamorphosis. Joseph’s journey started when he got pushed down that hole, and Bowie’s started as he got lost into space. Both metaphors work archetypally.

After this episode, Joseph goes through different life changes. First, Joseph refuses to have intercourse with Potiphar’s wife, then he is thrown to jail and starts interpreting the dreams, then he interprets Pharaoh’s dreams and then he becomes Pharaoh’s Prime Minister. Those are a lot of changes in one’s life! And those external changes, they made him go through internal changes. From the sassy young boy he was, he turned into a real help for the whole Middle East, and he also became more humble/reasonable on the way to that position.

And somehow, this is kind of what happened to Bowie. After Space Oddity, his first major song, he became Ziggy. Ziggy, that crazy glamorous alter-ego character that came to announce planet earth only had 5 years before its destruction. And after the Ziggy period, Bowie turned into Thine White Duke. A very tight and soul character singing songs filled with groove, life and a few other ingredients. Then, at the end of the ’70s, Bowie moved to Berlin and turned darker.

And from one period to another my friends, what a journey!  In terms of sounds, songwriting, recording techniques, inspirations… Bowie went so, so, so far. Until Kanye West showed up (the artist, not the public figure), it’s been a few years that I tell anyone who’d like to hear that no artist ever went that far. And we wonder, why do we have this possibility to transform ourselves? And where does it come from?

Well, maybe we can find an answer crossing Joseph and Bowie’s lives.

By the end of the ’80s, Bowie ended his New romantic/Pop era. In Ashes to Ashes, we find him singing “I am happy, hope you are happy too?”. Those lyrics are sung over a very refined melody change. The melody turns into a major mode that gives the illusion of a modulation to the third. In this climactic moment, this illusion created by the melody is not a fantasy, it is the birth of a memory. Bowie gets in touch again with his beginnings. “I am happy, hope you are happy too?”, those words are said by a certain Action Man who, is in fact, the Major Tom that lost connection with earth a long time ago in Bowie’s first hit. Somehow, this meta-reference in Bowie’s own universe makes me think this is the moment Bowie started being in touch with himself again. While fighting his battles (in this case, as it is explicitly mentioned in this song, his addiction to drugs), he started remembering where he was coming from, a form of Teshuvah. And guess who also went through such a struggling phase?

Joseph did not have addictions, but he was a man with a complicated inner life. We can see it via a very rare Taam we find in this week’s parashah, the Shalshelet. For a branch of the mystical tradition, this melody made of a motif repeated three times represents the movement of his inner struggles. He might not have accepted Potiphar’s wife invitation but a part of him was tempted, and this darker -and very human side of his personality- can also be found when he was speaking to his brothers, very selfishly, without any filter.

However, many years later, after he became Pharaoh’s Prime Minister, Joseph finds back his brothers, and he is not the same. He could have gone mad, or even be very cruel to them, but no such thing happened. While speaking to them, he just hid to cry. Who would have this reaction facing the ones whom once tried to kill him? This comes to teach us that he must have been through a lot inside to forgive them. And somehow, when Joseph was in prison, thinking about his family, I do imagine him singing “I am happy, hope you are happy too?”.

Metamorphosis, we are all subject to them. For most of us, they don’t look so dramatic as Joseph’s or Bowie’s. We don’t wear that much makeup, we don’t have visions. But still, they are here. As sure as seasons change, we change. And we end up discovering, this is vital. Metamorphosis are vital to our lives. And afterall, isn’t this is one of the most important concepts in Judaism, Hidush, renewal.

And they mostly help us because of our own battles… Addictions, attitudes, diseases, we all have a lot to fight against… And our metamorphosis, they are a way for us to fight them, as explained by Dr. Avivah Zornberg, by wearing different masks, we get better access to our true self. And this sense of true-self, it is our only way to face adversities.

Therefore, one last question remains. Where is this power coming from? Well, if we think about it, there is one biblical character whom changes, whom changes so much this character’s name is “I will be Who I will be” and this Character also said “let’s make Human in Our image”, the Eternal One.  Therefore, we understand that maybe this power to change, it is the result of what is the most holy within each and every one of us, our divine sparks.

Yes, we should always remember that. And if our Emounah, our confidence, is strong, we can be sure that this spark will shine, even if it gets very dark. Yes, as Joseph and Bowie, we shall be heroes! And who knows, maybe for more than just one day… After all, it’s Hanukkah soon!

Sha-Sha-Sha-Shabbat Shalom everybody!! (I hope you sung it over the melody of Bowie’s Changes).

Ok… So now we agree that both work pretty fine together, then which rock star should Moses be compared with? The Boss?   And who are Sarah, Rebecca, Rachel, and Lea? Marianne Faithfull? Anita Pallenberg? Aretha Franklin? Well, discuss it around your Shabbat tables, and if you have an idea, please write me at student.rabbi.etienne@gmail.com or find me on Instagram or facebook Etienne shades. I would love to hear what you have to say about it, and that could totally lead to the subject of my next LBC D’var Torah!