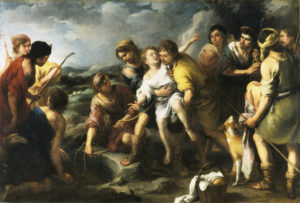 To the three men who stand at the heart of this week’s parasha, a father and his two sons, I wish to add in my reading of it two other Jewish men, Sigmund Shlomo Freud and his grandson, Ernst. In ‘Beyond the Pleasure Principle’ (1920), Freud describes Ernst playing a game he names ‘fort-da’, imitating the sounds the toddler makes when he throws away or hides and object and when it is retrieved or found. In a moment of epiphany, Freud understands that the joy the boy feels stems from his being able to control a scenario he normally has no control of – his mother leaving the house and returning to it. Freud soon takes this insight and broadens it to explain the recurring dreams of PTSD patients (‘war neurosis’), and patients which through transference push the analyst or others to behave in the way they experienced their parent to have behaved in their traumatic childhood moment. In all the cases, the repetition of the painful moment carries with it a hope that the story will end differently this time, that the psyche will be able handle its overstimulation, that the Other will not behave like the traumatizing agent. Alas, this never happens. But why am I telling you this? Because it is through this lens that I wish to read the story of Joseph, and its true hero, Judah. The point in the twenty-year saga in which our parasha begins is very close to its end. Joseph, who his brothers tried to kill as a boy – for his prophetic grandeur dreams and his father’s favour, is now second only to Pharaoh in Egypt.  During the time Joseph rises to power in Egypt, Judah loses his own two sons and sleeps with his daughter-in law, Tamar, who disguised herself as a prostitute, and teaches him a painful lesson.

When we return to Joseph’s story, the Bible had a simple and heart-breaking story. Jacobs sends his sons to Egypt to buy some food. Traveling together, the original 10-brother-pack does not think of Joseph even once. It is only when their own lives are threatened, in Gen 42:9-12 that he crosses their minds, when in their interrogation they oddly volunteer the information about their father and two missing brothers. The process of recollection, or rather, the return of the repressed begins. When a couple of verses later Joseph accuses them of being spies and demands that they bring their younger brother to Egypt, they speak, for the first time of their sin towards Joseph, not knowing that he has a spy among them. Joseph leaves the room to cry, and starts to re-enact his own story, by seizing Shimon, his older brother who in no stage of the brothers plot to kill him spoke in his favour. The repressed is a little less repressed but not yet confronted.

What happens in chapter 44 is a text-book repetition-compulsion in play. Joseph creates for the brothers a scenario that mimics his trauma. He separates the son of Rivka from his brothers. He takes away his father’s favourite boy, the one that the death of whom would not only make him wish, like Joseph he could go to She’ol with him, but drag him there. He brings all the brothers together to choose between their own favour and betraying an innocent boy, who he falsely blames for theft, he re-lives the trauma, and staged them to act out the cause for his unbearable pain.

What happens next is no less than a miracle even in Freudian terms. Joseph’s efforts do not lead to the world bending before his unconscious, nor to a better ability of his psyche to bear the pain of the initial betrayal by the brothers, but to an opportunity for the brothers to show that they themselves have changed.

Joseph’s repetition compulsion is met with resistance. Judah, the brother who suggested that the joke has gone far enough in the primal scene, but also suggests selling him, tells Joseph, in vivid details, of the pain which will be caused to Jacob upon losing his youngest and favourite son, and by that tells him of Jacob’s suffering caused by his own disappearance. He quotes Jacob, showing us that unlike his younger version, he can see the suffering of his father, perhaps as he has lost sons too. The jealousy which governed his behaviour in the past transformed into sympathy, sharing in grief, and seeing the wrong towards Joseph. Judah will not leave Benjamin behind, he offers to become himself a slave to Joseph, he refuses to turn his back on his brother and father a second time.

Joseph gets to see the scenario which shaped his life, the moment of abandonment over which he had no control, being replayed while he is controlling it. But even now he cannot truly do that. It is Judah, not Joseph, who is enabling the nightmarish circle to break. He becomes a real psychoanalytical hero – in control, aware, and able to change his own behaviour. This unexpected moment, when Joseph loses control over the scenario his unconscious created, the moment when the brothers stand by the favourite child instead of forsaking him, releases Joseph from the hold of his first trauma. As the scenario falls apart, Joseph starts crying “he wept so loudly that the Egyptians heard it, and the household of Pharaoh heard it.  Joseph said to his brothers, “I am Joseph. Is my father still alive?” But his brothers could not answer him, so dismayed were they at his presence”.

Notice that Joseph does not mention his relationship to the brothers in his exclamation, only says who he is and asks of his father. The brothers are terrified and paralysed by guilt and fear punishment, but Joseph cares not for that. Judah’s magic release of the trauma’s hold over him sends him into an intense retelling of his life story and reorganizing his inner world. The sell was but an opportunity, a step on the ladder which ascends to the heights of realizing his childish id dreams of omnipotence and greatness. He is able to go back to being a child, to the moment before anything bad ever happened, the moment before the beyond of the pleasure principle was born. Who can think of punishing in such a moment! A king, a grown up, to which the sun and the stars bow, he is now able to bestow presents upon his fathers and brothers.

“And Joseph made ready his chariot, and went up to meet Israel his father, to Goshen, and presented himself unto him; and he fell on his neck, and wept on his neck a good while.  And Israel said unto Joseph, I can die now, since I have seen you face, because you are yet alive”.

Joseph is being handed the crown by his father, who as you may recall liked not the dream in which he also bows to Joseph, and whose pain is a central feature in Joseph’s scenario. The sad story of Joseph’s past life might not be altered, but the miracle of change, of seeing one’s own faults and admitting to them, not repeating them, which is performed by Judah, resolves Joseph’s oedipal complex and PTSD in a way even Freud hadn’t foreseen.

Joseph, unlike young Ernst, was lucky, his repetition compulsion brought back to him his father, and brother and tribe. Ernst lost his mother when he was 6, his fort-da did not help him. We are today almost mid-way between the Jahrzeit of Ernst W. Freud, himself a psychanalyst, who died 30th of September 2008 and his mother Sophie, who passed away January 24th, 1920. Let us remember them both today, but mostly and let us all be more like Judah, let us look our own wrongs in the eye, and feel the pain of others, let us free the Josephs of our own lives.