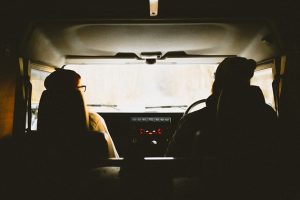 Next time you’re stuck in traffic and see people in the car beside yours enthusiastically singing along to something, you might like to check for cameras.  Since James Corden first made it a famous segment on his television show, Carpool Karaoke has become a popular format that’s filmed everywhere.  Corden invites a celebrity to join him for a car journey, supposedly needing an extra person to qualify for the car share/bus lane in rush hour, during which they have a great time chatting and singing along to a selection of the star’s songs.

Over the last few years, the format has been adapted and adopted by many other people; some now emphasise conversation over singing, including a Jewish father-daughter legal duo and rabbis travelling with clergy of other faiths.  Yet a camera put in our own car during the average daily commute might reveal a slightly different scenario; our longer journeys may look even less like the happy examples seen on screen.

Finding ourselves in a confined space and dealing with traffic can have us at less than our sparkling best, reducing our in-car conversations to fraught exchanges and long silences.  Our nerves may become frayed by worry about making it to our destination on time or by outside frustrations that accompany us into the car, while paying due attention to the road may mean we get distracted from conversation at inopportune moments; physical discomfort also plays a part, for travel sickness or an aching back rarely improves a person’s mood.  It’s easy for things to get tricky even when you like the people with whom you are travelling.

Perhaps we should spare a little sympathy for Jacob’s sons and the journey they face in Parashat Vayigash, which will take days rather than hours.  In an emotionally-charged scene, they have just discovered that their long-lost brother Joseph, the one they sold into foreign slavery twenty years ago, is now the most powerful man in Egypt.  Joseph tells them not to be distressed over their past actions, for all that has happened was part of God’s plan.  As he sends them to fetch their father and their families from Canaan, so that Joseph can sustain them all in Egypt through the remaining years of the famine, Joseph gives his brothers a final instruction:  “Do not be quarrelsome on the way” (Genesis 45:24).

This apparently straightforward instruction later becomes part of a Talmudic discussion of how to behave when travelling:  in Ta’anit 10b the Sages consider the dangers of over-long strides, how to time one’s arrival for an overnight stop, and the need for travellers to eat sparingly.  Their discussion of this verse begins with the opinion that Joseph is advising his brothers against getting too involved in halachic discussions on the road, either for fear of arguments becoming overheated or lest they become distracted and lose their way.

Centuries later, the medieval commentator Rashi suggests that there may be a less complicated explanation:  that Joseph feared that his brothers would argue with each other because of their shame and guilt over their earlier treatment of him.  It requires no great stretch to imagine tempers being likely to start to flare during the long journey home, with what to tell their father and the implications for them of Joseph’s current situation as their main topics of conversation.

Our modern experiences might lead us to consider the even simpler explanation that Joseph’s words are needed because any travel can be stressful enough to make us bad-tempered.  If Joseph had offered more specific advice on how to avoid quarrels along the way, it might sound rather like the RAC’s warnings over the recent holidays:  poorly planned journeys, vehicles not in roadworthy condition, and having very limited time to reach a destination all probably caused as many arguments in Joseph’s day as they do in our own.

He might also have advised employing music to help the time pass more quickly and to create a sense of togetherness while avoiding controversial topics.  While our ancient ancestors had to rely mainly on their own voices, we have technology to help us:  most cars today can play anything from the local radio station to our own curated Spotify or iTunes playlists.  We shouldn’t underestimate the power of a good playlist to enhance a journey, even without a celebrity guest to keep us on our best behaviour.

The next time we’re in traffic and see someone in the next car enthusiastically singing along, perhaps we should take it as a reminder to turn our own music on and do the same; with the help of a good singalong, we too might avoid being quarrelsome along the way.