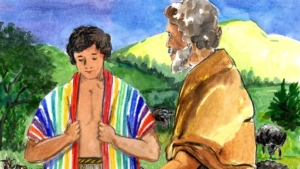 Even before I became a student rabbi, people would often ask me why I studied Torah. The answer for me is as simple now as it was then; regardless of its origins, which I do not believe to be divine in the traditional sense, and the why and wherefore regarding who put it together and made it one book, the Torah is a record of something very human. The stories within may not be a perfect history of what happened in Ancient Israel, but they contain kernels of universal truths about the human experience, alongside an attempt to create the foundations of a society, and describe the Ancient Israelite relationship to various manifestations of God.

As we make our way through Genesis, we come face to face with a narrative wherein several characters struggle to balance their strengths, and weaknesses, against a backdrop of their own human feelings. Whether or not we believe that these characters were real is irrelevant, their emotions and experiences speak to us regardless.

Jacob, arguably the hero of our current story arc, is a literary blessing in this sense. At the start of his story we meet a scheming young man who usurps his own brother for his birthright and paternal blessing, and now, towards the end of his story, he is a tired old man who, despite having lived a good life, is tired … and it is probably no surprise, he has been busy, but he has also spent most of his life mourning for Joseph, the son he thought was dead.

My attention is drawn, though, to Joseph; particularly, his relationship with his family and in particular, with his father.

As human beings with a range of complicated human emotions, we need to know we are loved, and that there is a safe space for us to be accepted unconditionally for who we are and how we are – this place we call home. On top of this we need the security of knowing that we can place our trust in our loved ones; trusting that they will do the best for us in any circumstance. Family is sacred, whether our biological family, or those we choose to be our family, but it is often said that those we love have the power to hurt us the most; is there a way for those that hurt us to truly apologise, and how do we forgive that hurt, anyway?

The Joseph story in Torah is an exaggerated family drama: a parent spoiling their favourite child, extreme sibling jealousy and rivalry, insensitive exchanges of words, and frayed tempers. As parashat vayigash begins, Joseph has still not revealed his identity to his brothers, but he has framed his younger brother Benjamin for a crime that he did not commit; theft of a silver divination bowl. I have always understood this act as one of revenge; the act of a man lashing out through bitterness and upset at his childhood, deciding to make Benjamin suffer as a prisoner in Egypt as punishment for the sins of others – something we humans often do in our personal relationships, forgetting that we are connected differently to different people who are not responsible for the actions of other people in the past. Judah was the true ringleader of Joseph’s enslavement and exile, but his plea that Joseph enslave him instead (Genesis 44:33) moves Joseph so much that he reveals his true identity: I am Joseph, your brother (Genesis 45:4). Might we read Judah’s show of love and compassion towards his father and brother as the product of a lifetime of repentance?

Joseph, looking inside himself and finding a way to forgive and stop punishing the wrong people for the evil done to him, and Judah’s emotional petition on behalf of his grieving father and innocent brother are the two starting points for a path towards healing the relationship between these two estranged brothers.

It has taken me some time to realise, but I am starting to see here that both men, through their estrangement, emotional turmoil, trauma, and relationships with others have learnt the importance of family (chosen or biological) and the important obligations that being part of one entails.

Joseph was a victim of an act of evil family violence, and he is looking for a sense of safety and comfort. He is looking for a safe space to call home, though he often finds himself overwhelmed and untrusting. I imagine that Joseph has until this point found it very difficult to trust that those he loves, and those who are meant to love him, will not treat him badly, and leave him.

We read this portion in the round-about period of Hanukkah and Christmas every year, and this year, a very special celebration of Hanukkah took place in Clifford’s Tower in York. Clifford’s Tower was the site of an horrific Christian anti-Jewish massacre in the 1100s, so to have Jews of all stripes together with Christians to celebrate in such a special place was remarkable. I am reminded through such an event of the words of Pope John XXIII in 1960, when he met with American Jews to start a healing process that was 2000 years in the making and ended with the publication of Nostra Aetate; he used the words of Joseph saying “I am Joseph, your brother.”

The words and actions of Joseph, and Pope John XXIII are a stark reminder of the importance of healing. Long uncomfortable periods of separation, silence, animosity, regret, building walls, and isolation can be overcome if we have the right people to love, provide safety, and offer comfort surrounding us and helping us to make that first step. Healing comes when we realise, like Joseph, our responsibility towards one another and the families we create, and then act on it.