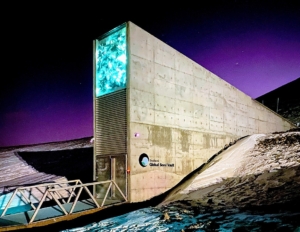 The Jewish people is not in cold storage

There are chilli pepper seeds inside the Arctic Circle. And grape seeds, barley seeds, rice seeds, tomato seeds, lettuce seeds, aubergine seeds. None of them have been planted. None of them would even grow in the ice-covered ground. In fact, they’re stored, carefully frozen, in a concrete bunker 120 metres into the side of a mountain.

This is the Global Seed Vault, a project of the Norwegian government to stockpile and store seed samples from as many crops from around the world as possible, the more staple the better. Should everything go belly-up for the world’s agriculture system, through climate change, nuclear war or solar extinction, it’s very possible that seed supplies could become contaminated or simply get destroyed. In that eventuality, the vault, on the remote island of Svalbard (also host to talking bears, for those watching His Dark Materials), is designed to be a Noah’s Ark for humanity’s food supply.

In this week’s parashah, we read about Jacob’s reunion with his twin and semi-enemy Esau. So nervous was he, about how the encounter would play out, that he “divided the people who were with him, and the livestock, into two groups, thinking that if Esau reaches the first group and strikes at it, the other one will survive’”.

This always struck me as fairly callous, because, of course, the two groups would never be equal. One would be at greater risk than the other. The first group, riding nearest to the front of the caravan, consisted of Bilhah, Zilpah and their children. Behind them rode Leah, Rachel and their children. No surprise, then, that the rabbis of the midrash concluded, “Acharon, acharon, chaviv” – the further back one is, the more beloved. The ones nearer the front… well, Jacob put them in the line of fire.

The midrash actually treated the whole story of Jacob dividing his entourage as an allegory for Israel and the diaspora: “‘If Esau reaches the first group and strikes at it’ – this refers to our brethren in the south [ie Israel] – ‘the other one will survive’ – this refers to our brethren in exile.” Should disaster strike Israel, well, luckily the Jewish people isn’t entirely concentrated in that one piece of land, and there will still be Jews to continue our traditions.

What I find fascinating about this midrash, though, is the sequence. Those living in the land of Israel are the first group. Those of us in the diaspora are the second group. Acharon, acharon, chaviv: the further back one is, the more beloved. Israel-dwellers aren’t the group being privileged for survival in the rabbis’ vision. Israel-dwellers aren’t the beloved wives Leah and Rachel, hand-picked by their husband for survival. No, Israel-dwellers are those chosen to remain in the line of fire, in a place of danger: the less-beloved ones, the expendable ones, who will distract the enemy and thus saving those of us lucky enough to be ensconced in the diaspora.

Except it’s not quite that simple. Let’s move back to the chilli seeds on Svalbard. Most of them were sent there by botanists in Taiwan. How did these botanists choose which seeds to keep for themselves, and plant and harvest and eat, and which to send off to the end of the earth to be frozen underground and (if all goes to plan) never sown or grown or used? Which were most beloved?

I find it impossible to decide. The seeds that stayed in Taiwan were the ones ‘in danger’ of being wiped out by natural disaster, and the ones evacuated to the Arctic were guaranteed survival. But, on the other hand, the seeds doomed to spend all eternity in the darkness – never flowering, never producing fruit, never bringing joy to those who harvest them (or tears to those who eat them unawares) – aren’t exactly thriving.

Is it better to die as a chilli pepper or live as a specimen?

The fact is, my seed analogy just doesn’t work for Israel-diaspora relations. Neither – despite the rabbis’ best efforts – does the midrashic analogy of Jacob dividing up his children. Because the fact is that the danger with Jacob was imminent, and there was every chance that the group chosen to be the easier target would, indeed, have been wiped out. Seeds, on the other hand, are generally fine. The chance of some major environmental catastrophe is scarily high but, nonetheless, not as high as all that. Generations of chilli seeds are going to continue to be planted, to grow, to be harvested and to be turned into curries, without harm.

So too Jews in Israel, so too Jews in the diaspora. The world doesn’t always feel like a safe place to be Jewish, but nonetheless almost all of us are fortunate enough to live secure and fulfilling lives. Some find fulfilment by living in Israel and being part of a vibrant Jewish state; others find fulfilment in living chutz la’aretz and bringing the light of Judaism to new generations of diasporic Jews. We’re in two groups, for sure, but neither group is ‘first’, neither group is ‘more beloved’, neither group is in cold storage, deprived of the right to immediate fulfilment so as to be available in a future emergency.

We are still left with the midrash’s remark about how the Jewish people is divided into two groups, with one there to pick up the pieces should disaster befall the other. For me, this has to be taken as a great rallying cry: “Each to their own!” We can all, hopefully, find fulfilment somewhere – and wherever we find it, we are serving a wider purpose as part of something bigger than ourselves.