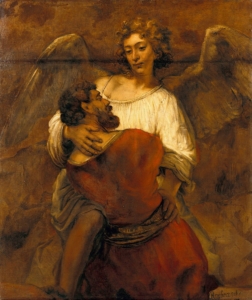 When to stop struggling

In this week’s parashah we encounter the story of Jacob’s wrestling (Genesis 32: 25-33). It is a story that speaks to us and that has defined who we are. At the end of the fight Jacob is given a new name. His opponent calls him ‘Israel, for you have striven with God and men, and won out’ (32: 29). Because names are not just tags, but proclaim identities, we, the children of Israel, are thus defined. As Jonathan Sacks writes: ‘We are the people who struggled with G-d and with man and yet survived’. (For his reading of the story, see https://rabbisacks.org/covenant-conversation-5768-vayishlach-jacob-wrestling/).

Or to be more precise, this is how we understand ourselves. We understand that struggling is necessary and we try not to avoid it. So, when a text is difficult, we stay with it. Every year at Rosh Hashanah we read the story of the almost sacrifice of Isaac at Rosh Hashanah, even though it does not become any easier on rereading. The image of struggling is also applied to our lives here and now. Stuck in a job that wears one down, or in a difficult relationship, we may decide to stay and wrestle it out. We do not walk away.

One of the reasons the image can be applied to such diverse situations is that it is not clear with whom Jacob wrestles. The text introduces his adversary as ‘a man’. Verse 25 reads: ‘And Jacob was left alone, and a man wrestled with him until the break of dawn.’ After the fight, the other suggests that he is divine, when in blessing Jacob, he gives him the name Israel. (32: 29) Jacob certainly thinks the man was divine when he names the place Peniel: “I have seen God face-to-face and I came out alive”. (32: 35) Hosea considers the being an angel (Hosea 12: 5) and Rashi suggests that it may be Esau, or Esau’s guardian angel. In their struggle, they grasp each other and intertwine their limbs as they did in the womb. What is more, when Jacob meets Esau the next day, which would be their first meeting since he cheated his older brother out of his birthright, there no longer seems to be any need to struggle with one another and Jacob tells Esau: ‘to see your face is like seeing the face of God’. (33: 10) More mystical interpretations suggest that Jacob struggles with himself or with his evil inclinations.

That this is not the attack of a random stranger, but that the two are close becomes clear at the end. Jacob does not want to let go. His hip is out of its socket, but he does not give up. The other wants to leave and Jacob asks for a blessing and then again for the name of the other. Depictions of this struggle suggests their intimacy by depicting them as lovers, as Rembrandt does in the picture above. In others, the two men seem to be dancing. There are clear homo-erotic undertones to a good number of these pictures.

That there is an end to the fight seems often forgotten when we take up the identity of strugglers. We may be confident struggling, but do we know when to stop? Jacob certainly does not and depends for this on his opponent, as there is no one else around. He leaves the place maimed, but also blessed. He makes a sad figure: ‘The sun rose upon him as he passed Penuel, limping on his hip.’ (32: 32) When he meets Esau on that same, he is still in a daze and has not yet understood what happened. He cannot reciprocate Esau’s joy on meeting him nor his generosity. Esau addresses him as ‘my brother’, which Jacob returns with ‘my lord’. And not even the story tellers are fully convinced by the change, for we are told that it is Jacob – and not Israel, who gives the place a name and that it is Jacob – and not Israel, who walks away with a limp and it is Jacob – and not Israel, who meets his brother.

The story thus tells us something else about who we are. It tells us that it is rarely easy to stop fighting. Of course there are occasions when it is not possible to stop, but there are also times, when we do not stop until we are forced to. Do we not know when to stop? Can we not imagine a future beyond the fight or are we scared of what may come? That we come out of this fight broken, does not mean it is the end. On the contrary, as broken people we are blessed with a new name and a new identity. Yet, as the continuation of the story shows, to realise our new identity can be even more difficult than the fight itself. We have to readjust to a situation, without an opponent and without a fight.

That too is our identity. If we understand ourselves as the children of Israel, then we are the people who strive with divine beings and with people and are still here, and that we are also the people who are forced to stop fighting and then come out limping and blessed.

When to stop struggling? While writing these words, I find myself wondering for which discussions and situations this image is appropriate and when it would allow us to stop struggling and walk away with a limp and a blessing. This is not the place to name or discuss those situations, but if we are the children of Israel, we will need to start thinking of ourselves as those we do not just struggle, but also end a fight – returning once again.