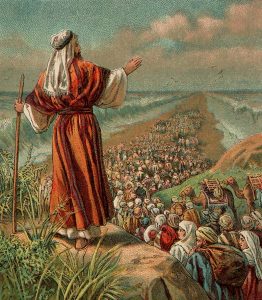 On Friday evening, Jews across the world will sit down to dinner, eating and drinking special symbolic foods, and telling the story of how our ancestors were liberated from slavery in Egypt thousands of years ago. As we do so, I wonder how many of us are picturing a real event; something that truly happened.

In his recent book, The Exodus: How it Happened, and Why it Matters, Richard Elliott Friedman argues that we should not accept the widely-held view that the exodus of the Israelites from Egypt is a mere fiction – that it never happened. Over the course of the book (which I highly recommend!) Friedman develops a thesis that the exodus may not have happened exactly as it says in the Torah, or in our Haggadot, but that there is a sizable kernel of historical truth to the story, if only we are willing to look for it. And, rather than relying on the archaeological evidence, or scientific speculation, with which so many continue to be preoccupied, Friedman looks for the proof in a critical reading of the Biblical text itself.

Friedman is perhaps the world’s most famous advocate of the ‘documentary hypothesis’ – that is the idea that the Hebrew Bible is made up of a number of much older documents that were brought together at different times by editors and redactors, being subjected to different editorial processes before emerging as the text we know and use today. Friedman is not the first to have this idea – it is a theory that bubbled away for at least two centuries, but was only really accepted by a large number of scholars in the twentieth century. Over the years, the original documents have been assigned letters to indicate who wrote them (E, J, P, D, and others). Not everyone agrees on the exact nature of each document or their authors, and much debate continues into the finer details, but the theory that the Bible was original a number of different documents has become widely accepted.

Friedman argues that the evidence of the text points towards the exodus not of all the Israelites from Egypt, but of a particular group: the Levites. The Levites were, he argues, a band of priests who left Egypt and entered the Land of Canaan, joining Israelites who already had an established culture, God, and holy book. Friedman points out that the only figures in the Bible who have Egyptian names are those who come from the tribe of Levi, Moses being foremost among them. More profoundly, he also shows that it is only in those of the original documents penned by Levites (primarily E and P) that the exodus from Egypt is cited as a reason not to oppress the stranger, or the resident alien, or the slave who lives with you. This oft-cited law of not oppressing the stranger (which appears no fewer than 52 times in the Torah) could be said to rely on the experience of having been strangers or slaves in a foreign land. The word levi itself, Friedman suggests, might mean an ‘alien’.

So, the Levites were refugees who escaped persecution in Egypt and found their home among the tribes of Israel dwelling in Canaan. Perhaps they were long-lost cousins of the Israelites, perhaps not. The point is that they joined their holy books together and made their national stories into one. We know from the final text of the Bible that the Levites were not given territory in the Promised Land. Instead they were supported by the other tribes because they made up the priesthood.

What is the significance of all this? Why does it matter? Well, for Friedman it is important to recognise that the exodus happened because it was what led to the emergence of ethical monotheism – the idea that there is only one God, and that that God requires us to behave in certain ways. It could be argued, however, that as twenty-first-century Jews we do not need for the exodus to have been a real event in order to hold to the idea of one God or the importance of ethical action. For Friedman ‘what happened matters’, and this is true. For him, it makes the injunction to love your neighbour as yourself all the more powerful, since it is based on a real, lived experience. And many of us continue to make this argument as we attempt to pursue practical change in our world. Those of us who campaign for the welfare of refugees often cite the fact that we were refugees – and not only at the time of the exodus, but much more recently!

But what if we had not been strangers in a strange land? If someone were to come along and disprove the historicity of the exodus, would we suddenly feel ourselves unbound by the injunction not to oppress the stranger? Of course, the recounting of the story of the exodus from Egypt can be both a memory of ‘what happened’ and a ‘radical act of empathy’, and for Friedman the former leads to the latter. The challenge remains to put ourselves in that situation, and that is the task of the Seder. The Haggadah tells us that, ‘in each generation, each person is obligated to see themselves as though they personally came out of Egypt’. Thus, it is the challenge of each new generation to see the exodus not as a mere distant historical event, but as a part of our very identity. As Jonathan Safran Foer puts it: ‘We are not merely telling a story here. We are being called to a radical act of empathy.’