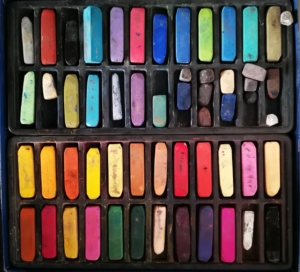 Some time ago, I was listening religiously to the sound of my shoes tapping on the white tiles of MAM, the Museum of Modern Art in Paris.

Inside, a bench faced the imposing paintings by Chaim Soutine on which were painted carcasses of meat hanging from a butcher’s hook.

Powerful colours, feverishness of the painter’s gesture and the butcher’s knife…

Soutine had lived a miserable life. He was born in a shtetl, in an Orthodox Jewish family from Russia. The legend tells us that the artist drew naturally, almost in spite of himself with what he found.

One day he drew the portrait in the street of an old man, probably a rabbi.

The man who had just been drawn felt completely desecrated along with the 10 commandments. He began to scream in the street, with a twisted mouth, making big gestures. It was then that his son, a butcher, came out of his shop, grabbed Soutine by the shoulders and dragged him down the street to the back of the butcher’s shop. He only stopped hitting him when Soutine fell unconscious.

Soutine could not get out of bed

for a whole week and kept on his face the trace of the butcher’s anger.

His family lodged a complaint with the authorities, Soutine won his trial and a few roubles of compensation which allowed him to go to Paris and become the painter we know today, famous for his paintings where the deformed bearded faces of the characters and the meat from the butcher’s back shop are superimposed on the canvases in disturbing images …

The bulk of the crowd was already passing from room to room and I stayed there, sitting on the bench. The ban on making images screamed in my head because it had caused Soutine his beating, but I was also torn by a contrary commandment: the creation of Adam “in our image” of Genesis, which we are ordered to multiply…

And God said, “Let us make man in our image, after our likeness. They shall rule the fish of the sea, the birds of the sky, the cattle, the whole earth, and all the creeping things that creep on earth.” And God created man in His image, in the image of God He created him; male and female He created them.

What is the text talking about when it mentions the word “image” here?

In Hebrew, “Tselem” is not bound by the performance ban. On the contrary, it is in this image (Adam is created in His image) that human beings are asked to be fertile and multiply. Tselem suggests a special bond between Adam and his creat

or . The term “betselemo” also means “his shadow”.

Created humans therefore follow “his trail” to use Levinas’s expression. It is this divine shadow, it is this image that we are enjoined to reproduce.

In parashah Yitro in the book of Exodus, it is the vagueness provided by the translation that is the problem. The verse of para

You shall not make for yourself a sculptured image, or any likeness of what is in the heavens above, or on the earth below, or in the waters under the earth.

But this word is not limited to prohibiting the production of images but also perhaps even more their use:

You shall not bow down to them or serve them.

These words naturally echo the more modern question of the dialectic of the status of the image, the work of art and the spectator. What makes an image an idol or a work of art?

The word pesel in Hebrew is built on the same root which means to cut, to carve (Rashi means here it is purely a sculpture), but also to disqualify and was translated by “eidolon” ​​in Greek in the Septuagint then by idol .

According to the 10 commandments, the biblical prohibition therefore concerns any production of images and sculptures of all that lives on earth, in the heavens and under the earth to which one consecrates one’s status as an idol and before which one prostrates oneself.

The Torah, in an incredible modernity, asks the question:

would an image or an objec

t be consecrated by the gaze that we pose on it?

What makes an object a work of art?

It is in this questioning that Marcel Duchamps proposed in 1917 to exhibit a “ready made”, “La Fontaine”, an industrial urinal for an exhibition of modern art instead of making a sculpture with his own hands. The original object is a simple sanitary item bought in a store.

Here Marcel Duchamps questions the viewer about the nature of a work of art. The work is no longer based on the technique, the aesthetics or the uniqueness of the work. Here, only the viewer works and makes the object a “work of art”. Carried away by “a museum observance”, the viewer gazes on an everyday object lingers on unexpected aesthetic criteria, produces meaning by interpreting and consecrates a mass-produced object as a work of art.

Similarly, moving works of sacred art from churches to museums in France during the French revolution changed so much the conventions of the viewer. Works of sacred art such as Rembrandt’s Great Altarpieces were suddenly n

o longer relegated to their functionality: to educate and seduce the masses for a liturgical purpose, but to be consecrated “works of art” by the joint roles of museums and gaze of the public which sometimes calls for criticism and analysis. But it is indeed the viewer who is enjoined to fulfill this part, as if in extension of the artist’s work to become a “work” and thus plunge fully into creation.

If the viewer echoes the artist, if he/she interprets, produces meaning, asks questions, isn’t it the same with our commentators?

Both can venture on the paths of interpretation filled with questions or to make an idol of it depending on whether his gaze is filled with certainties and a cold objectification.

For there to be some freedom in our relationship to visibilities, it is still necessary that they impose no indisputable proof, no doctrine or opinion that would found a “true belief”.

Isn’t it the same with the idols as they are described in the verse?

I was alone in the museum hall, surrounded by images.

Eyes amazed in front of the vibrant canvases I thought I heard this word that the Midrash says when speaking of books: “darshani” (interpret me). Like an invitation to see, beyond the pshat, the primary meaning of the images, the emotion and the energy of the painter, an invitation to run after the secrets of the artist to extend his work in his company by questioning it.