Leo Baeck College is delighted to announce that Jeremy Schonfield has been appointed Professor of Liturgy this week.Jeremy began his career at Leo Baeck College in 1995 originally as temporary cover for Rabbi John Rayner whilst he was unwell and later took over from him permanently to teach Liturgy and Prayer. 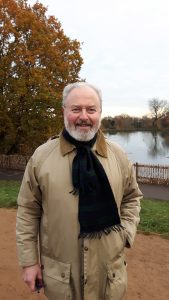 A year later he took over the Lifecycle and Festival Cycle course from Rabbi Sybil Sheridan, and subsequently developed other modules on liturgy, rabbinic texts and piyyut, five of which he still teaches, one of them in tandem with Rabbi Dr Charles Middleburgh, Dean and Director of Jewish Studies at Leo Baeck College. He taught a research colloquium with the late Rabbi Sheila Shulman for several years.

Jeremy has lectured on traditional liturgy and prayer for thirty years at the Oxford Centre for Hebrew and Jewish Studies and for over twenty five years at Leo Baeck College and has had a strong influence on successive cohorts of Progressive rabbis, with many of whom he remains in touch and advises on academic and other queries. Jeremy’s book Undercurrents of Jewish Prayer, published by Littman Library of Jewish Civilization, was a runner up in the National Jewish Book Awards in the category of Modern Jewish Thought when it came out in 2006. Jeremy is currently in the later stages of writing a sequel, to be called ‘Why Jews Pray’. Several papers relating to liturgy or to the subject of this book have also appeared in the journal European Judaism, published at the College. Of his new appointment, Jeremy says he is “delighted and honoured to have my work at Leo Baeck College recognised in this way by colleagues whom I respect and admire. I see it as a gesture of esteem.”

Rabbi Dr Charles Middleburgh, Dean and Director of Jewish Studies at Leo Baeck College said, “Jeremy Schonfield has been and continues to be a symbol of the highest academic quality, combined with personal integrity and empathy, for his students and faculty colleagues. He has been influential to several generations of LBC Rabbinic students and helped many develop a passion for the liturgy they use throughout their working lives.” Rabbi Dr Deborah Kahn-Harris, Principal of the College said “When I first moved to the UK thirty years ago, Jeremy welcomed me to life in the UK as my teacher in Oxford. I am immensely proud that, as Principal, I am now able to welcome him to his new role as Professor of Jewish Liturgy here at Leo Baeck College.”