Sefer Ha-Aggadah - The Book of Legends

Sefer Ha-Aggadah is a monumental anthology of rabbinic literature. It was first published in Odessa in 1908-11, a cornerstone in the project of poet Bialik and editor Ravnitzky to revive Hebrew language and culture and give access to their contemporaries to their national literary heritage. They describe the Aggadot, the non-legal texts of rabbinic literature compiled, as a once beautiful palace now a ruined and abandoned field, their task to rejoin the fragments of stone to make a fortress which would hold the unique worldview of the Jewish people. No small task, they spent three years exploring the vast, cavernous and complex world of rabbinic literature and selected, translated, compared, combined, edited, annotated and finessed legends, stories, sermons, anecdotes, aphorisms and folklore. They saw themselves as “organisers” rather than editors and their great editorial innovation was their arranging, the thematic organisation of their material drawn from disparate texts scattered across time and place. 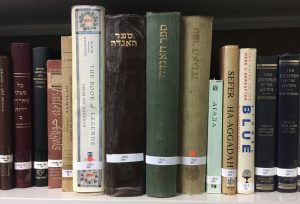 The shelves where the library’s copies of Sefer Ha-Aggadah are kept, give an insight into the nature and development of the Leo Baeck College Library. We find an edition published by Bialik and Ravnitzky’s publishing house Dvir in Israel in 1956, the layout and typeface typical of the printing of the young state. It belonged to Dr Ellen Littmann who taught at the college from its very early days and donated much of her library to our collection. She is pictured below teaching a bible study class at LBC in the 1960s. We have an edition from 1960 with a green spine and gold pomegranate on the cover, that fecund symbol of Jewish creativity. This originally belonged to the Union of Liberal and Progressive Synagogues Rabbinic Library, housed at Liberal Jewish Synagogue in London and costing three pounds and ten shillings. Another copy of the same edition, its spine and pomegranate a little better preserved having been in private hands, comes from the library of alumnus Rabbi Harry Jacobi MBE z”l. As the book plate reads it was presented to him by Lily Montague on behalf of the ULPS on the occasion of his ordination as Reverend in 1961. 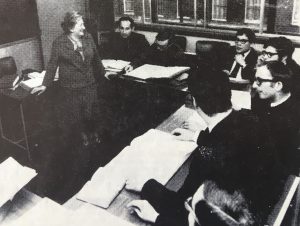 These careful previous owners show the way many people feel about the library, which has been very moving as an incoming librarian to experience  – that they want the books that have nourished them to be available to do the same for future generations. Donations from rabbis and readers have meant that the library is not solely the vision of a particular librarian, but a communal endeavour to share the knowledge, narratives and their analysis necessary to illuminate all aspects of Jewish thought and life and to enable their renewal and reinterpretation. We can see the firm place of Sefer Ha-Aggadah in the bible scholar’s library: the need for guidance in entering the palace of rabbinic literature and the importance of narrative as a pedagogic tool. 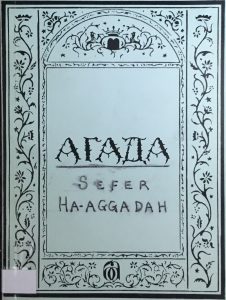 In 1992 the collection was translated into English and published by Schocken. It’s beautiful dust jacket, pictured above, is based on a design from an Italian Kettubah (Jewish marriage contract) and the romance of the hearts, birds and flowers seem to nod to the fertile creativity of the rabbinic imagination captured inside. William Braude’s translation made the work accessible to a whole new audience, as Bialik and Ravnitzky’s translations from Aramaic did 90 years before. Less grand perhaps is a paperback volume of a Russian translation, a version to support the students at the college from the FSU, and in some way bringing us back full circle to Odessa in 1908 where the first stone was laid for this remarkable, personal and political literary endeavour.