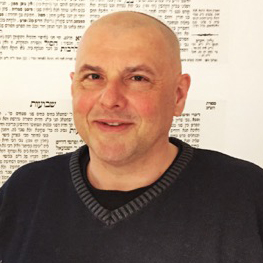 Before his Rabbinic ordination in July 2014, Rabbi Dr René Pfertzel held various teaching positions in France. He earned a teaching degree in 1990, the “Agrégation d’Histoire”, and taught in French High Schools, as well as a year at the Sorbonne in Paris, where he taught a course in Anthropology of Judaism. He earned a PhD in Biblical Studies from the University of Strasbourg, France, in 2004. He examined the unofficial corrections of scribes (Tikkuney Soferim) that can be revealed by comparing the different textual traditions of the Hebrew Bible.

He began working with Progressive communities in France in the 1990s, mainly in his hometown, Strasbourg. He had also a long term partnership with the Liberal community in Lyons, Keren Or, which he served as Rabbi between 2014 and 2016. After two years of commuting between Lyons and London, where he served the Liberal Jewish Synagogue in St Johns Wood, Rabbi René Pfertzel decided to work full-time with Kingston Liberal Synagogue, a constituent of Liberal Judaism. He is currently the chair of the EUPJ Rabbinic Conference and works closely with the EUPJ management. Alongside his rabbinic work, Rabbi René Pfertzel is working on a digital catalogue edition of the sermons of the late Rabbi John D. Rayner, under the auspices of the Liberal Jewish Synagogue.