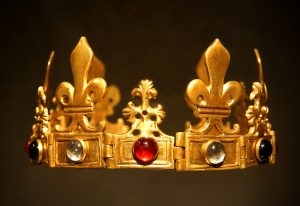 ‘When/if you come to the land that the ETERNAL your God has given to you, and you shall possess it and dwell in it, and you shall say: Let me set a king over me, like all the nations that are around me.’ – Deut. 17.14

A few hours after Shabbat, I found myself at a housewarming party drinking wine, eating crisps, and discussing the monarchy. Although many see the UK monarchy as apolitical and essentially powerless, they continue to tell us much about ourselves, particularly when we talk about them. Our Prime Minister has caused some debate by the way in which she curtsies to the royals when they meet. Some people say that her way of doing it is all wrong, while others are upset by the fact that an elected official would bow to an unelected monarch at all. In our discussion there were views from all positions, and the strength of feeling about the issue ranged from strident to non-existent. Before I began the rabbinic programme at Leo Baeck College, I was a historian of political thought, focussing on the period of the Civil Wars in Britain in the seventeenth century, which has led me to spend quite a bit of time thinking about arguments for and against monarchical rule.

We first encounter the idea that the Israelites might be ruled over by a monarch in this week’s parashah (see the quotation above). It is not until the events at the beginning of 1 Samuel that the people do, in fact, ask for a king to be set over them. When they do, the prophet begins a long admonition, detailing the many crimes a monarch will perpetrate against their subjects:

Yet the people do not listen to Samuel, deciding to ask for a king anyway. The subsequent four books of the Nevi’im tell us the various consequences of this decision.

A huge amount hinges on the translation of the first word of the verse in Deuteronomy. The word כי  can be translated as both ‘when’ and ‘if’ (it can have a number of other translations, but these are the two that make most sense in this context). The first of these options makes it appear inevitable that the Israelites will want to set a king over themselves when they come to enter the land. The second option makes it appear possible but not inevitable – the Israelites may exercise their judgement and decide not to have a king.

Of course, the narrative of the book of Judges in the period preceding the Israelites’ request for a king takes us in the direction of monarchy. Political and social instability plague the nation during the period following the death of Joshua, with strong leadership only appearing sporadically. The Israelites exist in a seemingly permanent cycle of chaos followed by the rule of a strongman to bring stability, followed by a renewed descent into chaos. It is certainly not surprising, therefore, when the Israelites do eventually ask for a king – but that does not mean that there were no other options that they could have considered.

Intellectual historian, Eric Nelson, has studied the rise of ‘republican exclusivism’. This is the idea, developed over the course of the English Civil Wars (1642-1651), that republican self-rule was not merely one legitimate form of government among many, but that it was the only legitimate way of organising a political community. One of the main pillars of republican exclusivism is the notion that arbitrary power in the hands of any section of the population renders the remainder of the people slaves. Arbitrary power is power that is held over a person without their consent, and without any kind of checks and balances. The power of Parliament is not arbitrary – even if I do not agree with everything my MP does, there will be an opportunity to vote them out in the next four years, and MPs are constantly monitoring each other’s behaviour in order to keep it in check. By contrast, monarchs have no power to keep them in check. This was particularly true during the English Civil Wars, the lead up to which was littered with abuses of the people on the part of the increasingly tyrannical monarch, Charles I. Although the Civil Wars did not lead to the permanent abolition of the English monarchy, the political landscape was never the same again, and by the end of the seventeenth century Parliament was the ascendant political power in the land. Now, our monarch is largely considered to be a mere figurehead, lending a sense of stability and permanence to the Parliamentary political order.

Nelson argues that the role of Jewish sources in the rise of republican exclusivism has been largely ignored. His book details how European republicans were influenced by Jewish sources, including the Hebrew Bible, Talmud, Midrash, and Medieval biblical commentaries such as that of Don Isaac Abravanel. What emerges from this work is the conclusion that ancient Judaism was by no means as fixated on monarchy as some readings of the Hebrew Bible might have us believe. Some of the midrashim and commentaries on the Torah conclude that the word כי  should be translated as ‘if’, and that the terrible consequences that Samuel describes – the abuses that the monarch is likely to perpetrate against their subjects – are in fact punishments for asking for a king in the first place. Indeed, to ask for a king can be read as a rejection of God’s sovereignty in favour of an earthly ruler, and as the Psalmist reminds us: ‘It is better to take refuge in God than to trust in princes’ (Psalm 118.9).